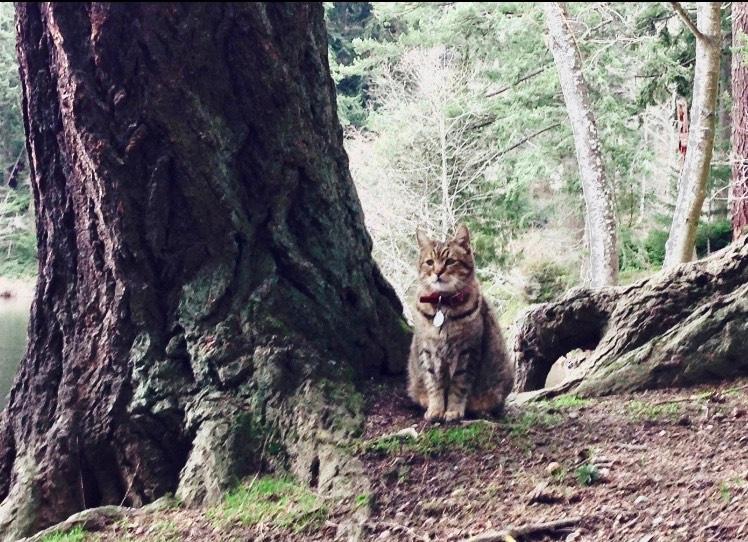 "It is remarkable that my cat has survived and is back to normal. Nom Nom was a great part of his recovery."

Heidi Norris has had her 13-year old Pixie Bob, Puss, since he was two. "He's got a lot of personality," she laughs. "He's just a character."

Heidi lives on beautiful Whidbey Island in the Pacific Northwest. When Puss came to live with her, he'd been an indoor cat, but on Heidi's three-acre farm, he was free to roam, climb trees, and enjoy the great outdoors.

But in December of 2018, Puss began to experience some health issues. After an allergic reaction to some flea bites, he received a steroid shot to calm the itching. Unfortunately, Puss became quite ill shortly thereafter. "He lost weight, became despondent, and wouldn't move. It looked like he was going to die," says Heidi.

Stressed and worried, Heidi brought Puss back to the vet, who said he was extremely dehydrated and that he'd tested positive for feline diabetes. "The vet said she'd seen this happen before, but had only seen three cats survive it. She said the steroid shot may have caused the diabetes, and that we'd have to wait months for it to wear off."

So Heidi decided to be proactive. "I thought, 'if he has diabetes, he needs more protein.' So I Googled high protein cat foods, and Nom Nom came up." She decided to place an order and hoped it would make a difference.

And that it did.

"Within a month, he started regaining much-needed weight. We could just tell it was making a difference. By springtime, he was going outside again. He's 100% back, his personality is back!"

Heidi knew pretty quickly that Puss was back to his old self. "I left the Flavor Flakes on the table. One night, I kept hearing all these weird noises. He had it on the ground and was eating it like it was catnip!" she chuckles.

An added benefit: at his sickest, Puss was urinating all the time and not using the litterbox. Just a month after starting Nom Nom, Puss was back to a healthy routine, using his litterbox and urinating a normal amount.

A year in, Puss is still eating and loving Nom Nom. And Heidi's vet has been surprised and impressed by his incredible turnaround.

"We attribute 80% of his health improvements to Nom Nom," says Heidi. "It's high protein, pure food, good and healthy. Nom Nom really is good, it was the diet that he needed."