Putting the Pro in Probiotic Supplements for Dogs 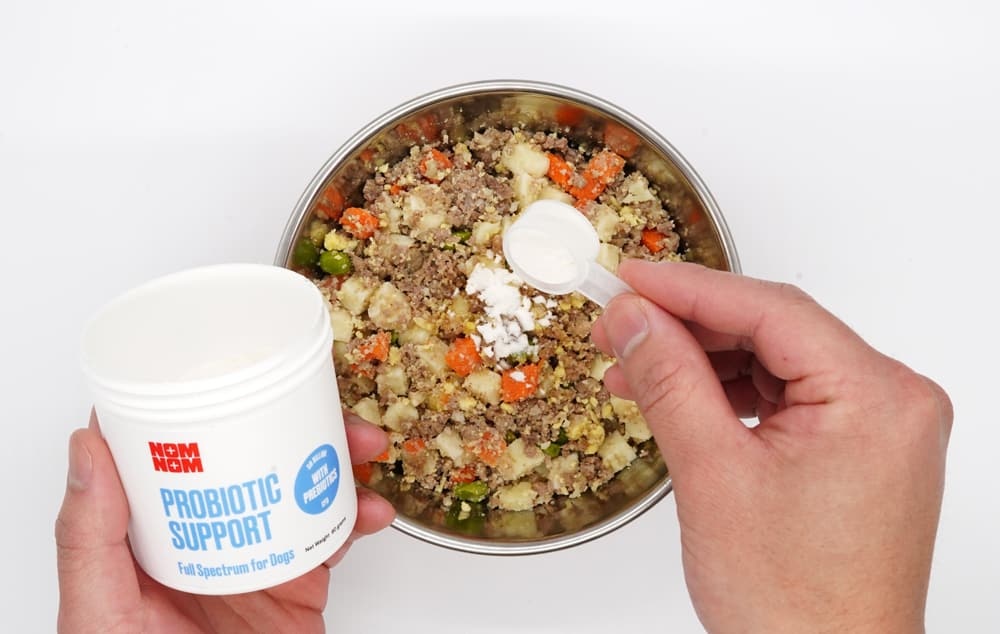 Providing the very best in pet health for your family members means more than simply formulating the most nutritionally-balanced recipes and products — it means testing and improving on the science Nom Nom put forward. Toward that goal, our R&D team has just completed our first randomized controlled trial. These trials are the gold standard of the scientific community. The results have recently been published in Animal Microbiome, a journal which focuses exclusively on animal microbiome studies.

Don’t want to dig too deep into the scientific details? Click here to skip to the gist of our findings. Otherwise, keep on reading to find out more!

For this trial, we focused on our Full Spectrum Probiotics for Dogs.

Yes, bacteria. But the friendly kind. In both humans and dogs, bacteria can actually outnumber the cells in our bodies. Most of that bacteria live in the gut, and most of it is harmless. Some of it is even helpful. This probiotic blend was uniquely formulated by Dr. Ryan Honaker, our Director of Microbiology, and Dr. Justin Shmalberg, DVM, our Chief Scientific and Medical Officer, and contains seven species of live bacteria associated with good health based on scientific literature.

Hence the name, probiotics help foster good bacteria and can colonize the gut with health-boosting microorganisms.

You can improve your dog’s microbiome (gut) by giving them probiotics — a supplement consisting of helpful live bacteria.

Neither the participants nor the researchers were told which dogs were in which group.

All samples were then sequenced to determine the bacteria that were in the dogs’ guts.

We observed that all seven beneficial species of the bacteria in the probiotics were successfully enriched in the guts of the active group, and not in the control group.

The abundance of most of the probiotic strains also went back to baseline levels two weeks after treatment. This suggests that feeding probiotics, like any other lifestyle change, is likely not a one-time intervention but needs to be maintained as a routine. This is consistent with findings from other scientists.

Interestingly, the amount of harmful and opportunistic pathogens found within the microbiome decreased within the guts of the active group. Which is likely because they were ousted by the thriving healthy newcomers introduced by the probiotic treatment.

Digging deeper into the results

It is good to see that a handful of beneficial bacteria were increased with the probiotic supplement. However, the canine gut is composed of thousands of different bacterial species. They interact and constitute a complex ecological system which is unique to each dog.

So, how much impact did probiotics actually have on these dogs' gut microbiome overall? We began addressing this question using a statistical method called Principal Coordinate Analysis (PCoA). This method combines and summarizes the abundance of thousands of bacterial species into a handful of specific factors that can help explain and compare variations of the gut microbiome.

We discovered that in the active group, our probiotics caused a significant increase at week four in one of the factors, named PCoA4 (see figure below, red bar compared to blue). This explained 4.7% of the observed variation of the gut microbiome. This increase returned to baseline at week six, two weeks after probiotic treatment ended (gray bar mirrors blue). 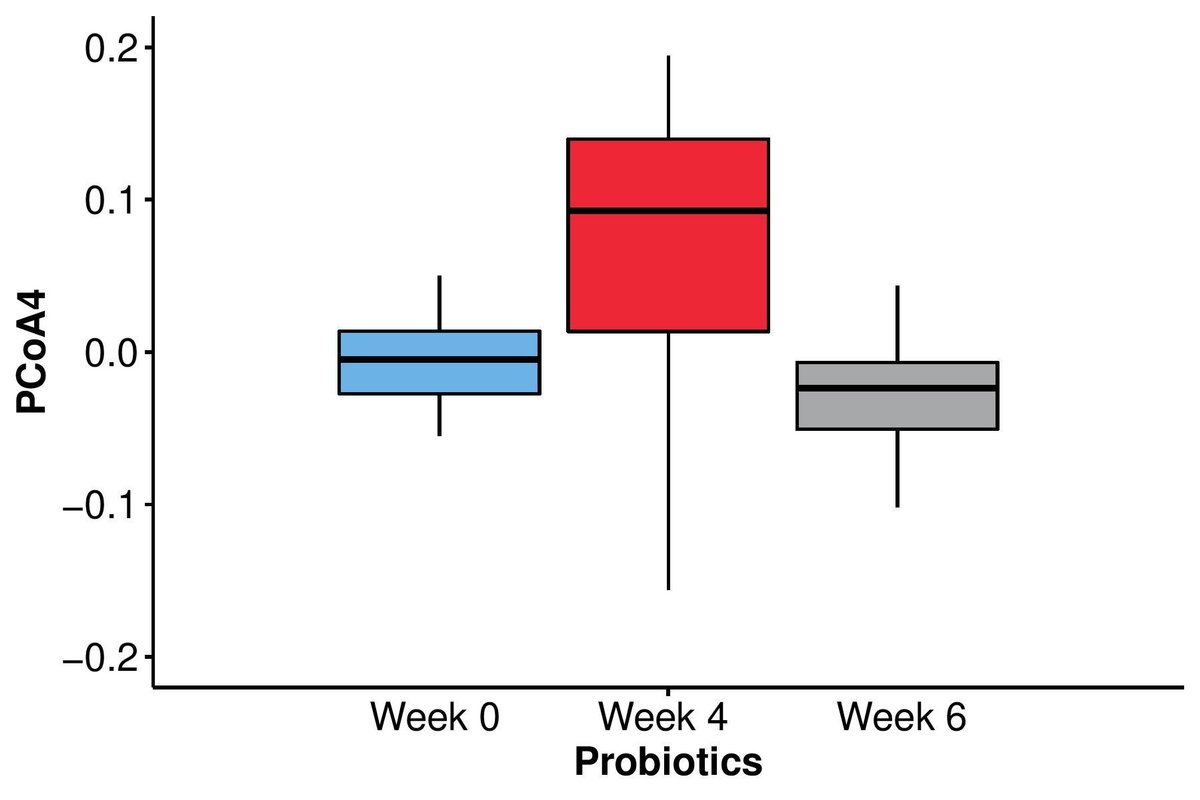 Like a dog with a bone, digging even further into the results

As pet parents, we know that no two dogs are the same. This is true for their microbiome as well. We split the active group into three subgroups — low-responders, mid-responders and high-responders to see how they differed in their responses.

Like the subgroup names suggest, some dogs had a big increase in their PCoA4, some had only a small increase, and some even had a drop in the PCoA4 score. This is illustrated in the chart below. 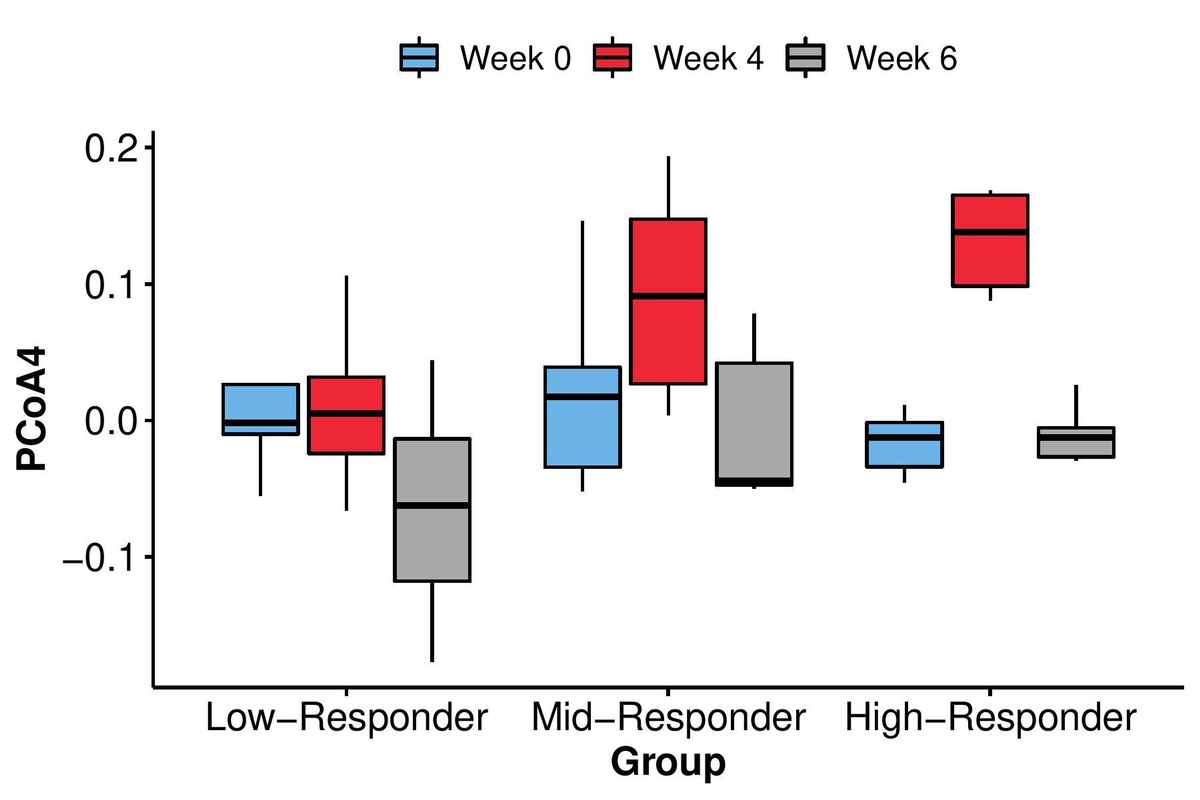 We looked back at the baseline samples from these subgroups and found that high-responders lack many bacteria belonging to the order Lactobacillales (lactic-acid-producing bacteria). On the other hand, the same group had a higher instance of bacteria belonging to the order Enterobacteriales. One of them, whose name you may have heard of, is Escherichia coli or E. coli.

We’re planning further study into the canine microbiome to delve into this more. But we can confidently say that your dog’s starting microbiome has a big impact on the efficacy of probiotic supplements.

Some response is better than no response — and a small response doesn’t mean it’s not significant. Even if your dog is a mid- or low-responder, you should not feel discouraged from giving your dog the probiotic supplement, as the average beneficial effect is still observed when compared to those that received the placebo. And, if you think about it, maintaining a functioning microbiome is just as valuable as improving a deficient one.

The gist of the study

It has previously been observed in other studies that individual dogs respond differently to probiotics, but it was unclear what factors determine the difference in response.

The Nom Nom team is among the first that were able to pinpoint that the baseline gut microbiome may be one of the main factors determining how responsive your dog is to the benefits of a probiotic supplement.

Our ultimate goal is to be able to offer personalized nutrition recommendations from a wide selection of products based on your dog’s unique information, including their microbiome profile.

While this goal is still a way off and we need more data to enable it, this is definitely a step in that direction.

We can say that the probiotics tested had a measurable and statistically significant effect, and we demonstrated that feeding your dogs with Nom Nom Full Spectrum Probiotics for Dogs for 4 weeks can enrich their gut with the bacteria species present in our probiotics.

These bacteria have been shown to be abundant in healthy dogs in other studies, and we are pursuing these results further. It’s tough to say at the moment what long-term positive effects this may have, since the study was too short to observe any health improvement within only four weeks.

Based on a preliminary analysis in this study, while no dogs fed the real probiotics experienced any diarrhea, 16% of the dogs receiving the placebo reported having diarrhea at least once during the study period. It is possible that our probiotics may prevent diarrhea — this was a promising, but unexpected, result to this study.

We investigated this finding further in this study and found that our probiotics indeed have a preventive effect, reducing the risk of future diarrhea in dogs with low-to-moderate risk of diarrhea. If you’re interested in learning more about our research and upcoming studies check our this page or email us at [email protected].