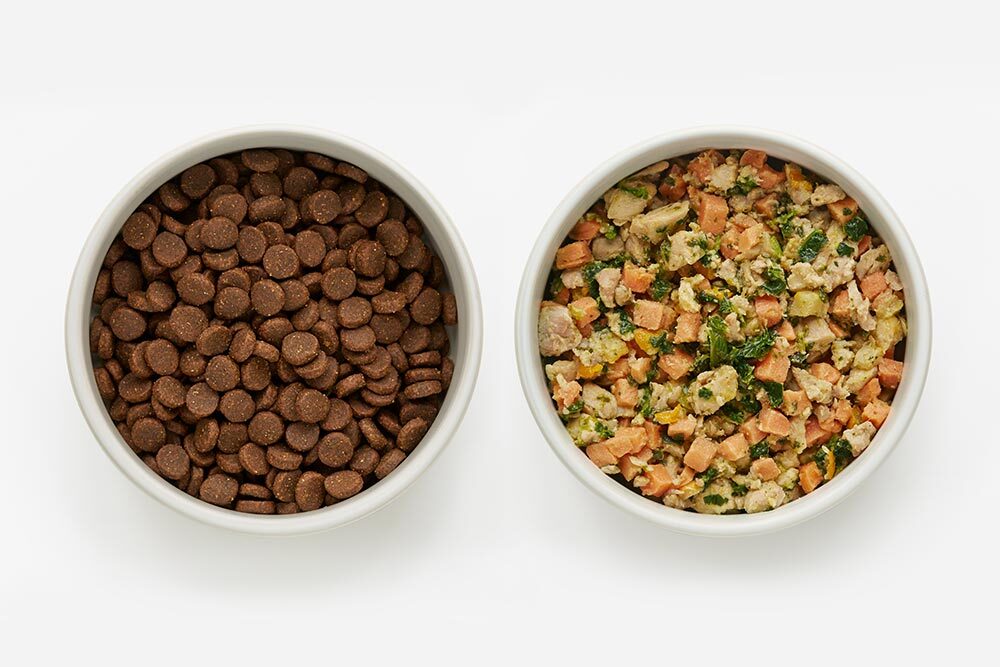 Your pet’s food is absolutely nothing to kibble about, and the Nom Nom R&D team set out to prove it once and for all. For the first time ever, the team — led by Dr. Justin Shmalberg — pitted Nom Nom fresh food against dry kibble in a head-to-tail measurement of digestibility. The results of this trial have been formally published in Translational Animal Science a journal published by the American Society of Animal Science.

Why does digestibility matter?

It’s all about the nutrients. Like humans, pets don’t always 100% digest the food they consume. Which means there are vitamins and nutrients that don’t get absorbed, and go to waste. A diet with higher digestibility simply means that higher amounts of healthy nutrients can be utilized for growth and maintenance.

Digestibility is determined by many factors, like the amount of fibers in the food or the degree of cooking. And there has been some evidence showing that freshly cooked pet food is more digestible than kibble.

That’s what we set out to test.

How do you test digestibility?

To put it scientifically, we looked at fecal matter. Yes, pet owners, what’s going on with their poo is very important and can be an indicator of food digestibility.

Back to the study

During the experiment, dogs were fed once daily, and their food intake and fecal weight were recorded. After 5 days, the dogs were considered accustomed to their new diet, and fecal consistency and frequency were also noted. At the end of the study, their fecal samples were sent to a lab for a nutrient composition analysis. (We love our jobs.)

One more thing: Both the kibble and Nom Nom fresh diets had comparable nutrient profiles. Even the kibble chosen was considered high quality and nutrient-rich, to make this a truly fair comparison of digestibility.

And for dog parents who happen to be statisticians, we should also mention that measures were considered statistically significant if p<0.05.

Our scientists first looked at fecal output, specifically the daily defecation frequency. Shown in the chart below, the dogs defecated significantly less frequently when they were eating any of our Nom Nom recipes compared to kibble. 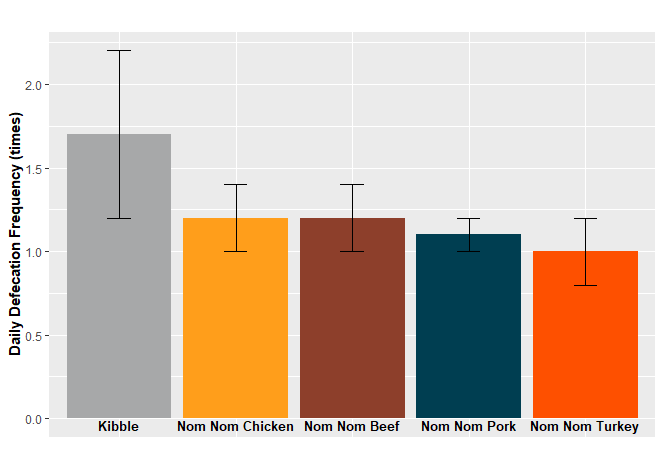 Our scientists also looked at fecal moisture content, which as shown below, was found to be significantly higher in all Nom Nom recipes compared to the kibble diet, but comparable among Nom Nom recipes. This indicates that stool quality was better with Nom Nom diets.

We should also note that stool consistency across all diets was found to be similar and in normal range — slightly soft but still formed. These fecal output findings collectively indicate that Nom Nom diets are easier on their tummy. 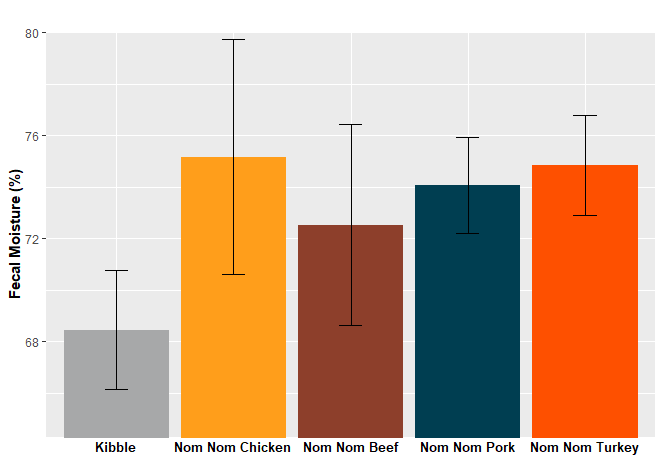 This one is relatively straightforward: We know how many nutrients and calories the dogs ate, and we can measure how much of the same came out in the stool.

We evaluated the stool on five categories: dry matter (everything except water content), fat, protein, nitrogen-free extract (NFE; consists of soluble carbohydrates) and calories. Shown in the chart below, we found all Nom Nom recipes to be significantly more digestible (> 90%) in all five categories compared to a nutritionally-similar commercial kibble. 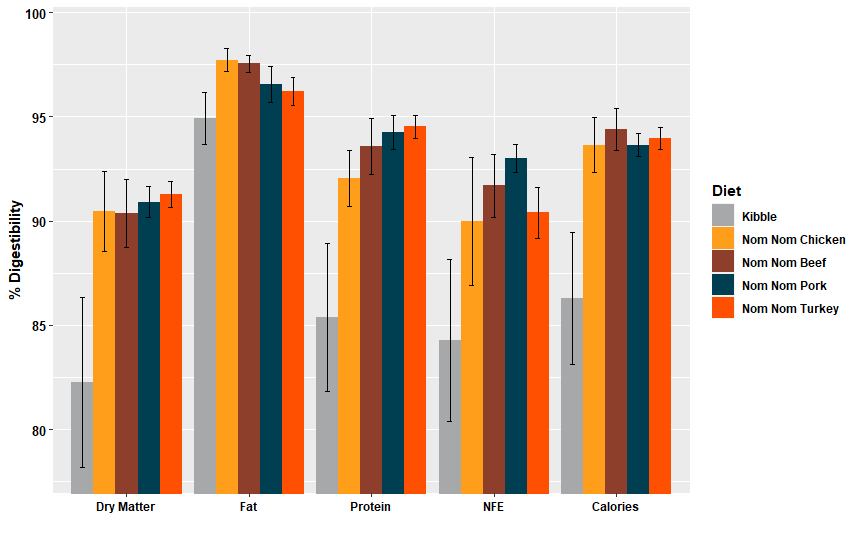 Another important measure is metabolizable energy, defined as how much energy can be utilized for growth, maintenance and physical activity per gram of food (dry weight) consumed. With the exception of Nom Nom Pork Potluck (likely because of its lower fat content), all other Nom Nom recipes showed significantly higher metabolized energies than the kibble diet. In other words, for the same amount of food, your pet gets more energy to utilize toward body functions and fun. 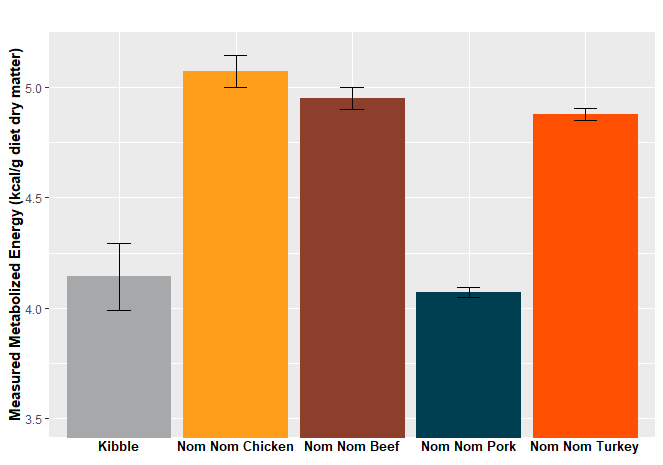 One might think that a higher metabolizable energy could lead to obesity, since a higher percentage of calories are available to burn. However, comparing the two chicken diets — kibble and Chicken Cuisine — dogs showed a trend towards less weight gain on Nom Nom, despite similar food and caloric intakes. Additionally, on all other Nom Nom recipes, dogs showed a trend towards minimal weight change.

It may be because these dogs were more physically active when they were fed Nom Nom, as it has been anecdotally reported. (Some findings in cats also support this notion.) Unfortunately, this study did not have a measure of physical activity and it’s something that our science team is hard at work integrating into future studies.

RESULTS —
Nom Nom has a higher impact on health than kibble

This study has demonstrated that despite a diet being nutritionally adequate and meeting AAFCO nutrient standards, available nutrition depends on many factors.

Supported by lower fecal frequency, higher nutrient digestibility and greater metabolizable energy, this trial confirmed that fresh diets, specifically Nom Nom recipes, are in fact more digestible than even a seemingly nutrient-rich kibble. So for the same amount of food, more energy is available and less nutrients go to waste — better supporting your dog’s growth and maintenance.

Talk about bang for your bark.