Samantha’s Story: Getting an Alaskan Malamute to Eat

Lydia Stroup's 9-year-old Alaskan Malamute, Samantha, would only eat every few days, until she fell in love with Nom Nom. 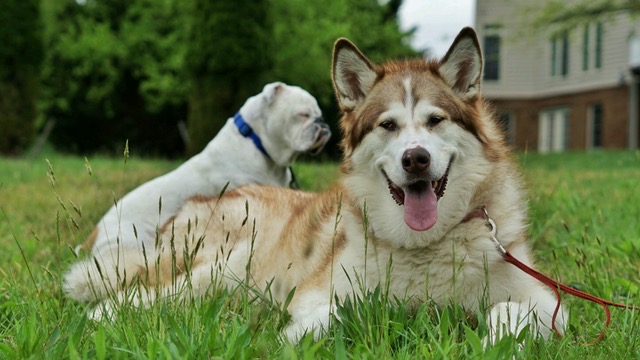 "Nothing else had ever gotten her to eat that much. Before she would eat only when hungry. Now she will stand by the bowl and be like 'Where's my next bag?'"

Lydia Stroup's 9-year-old Alaskan Malamute, Samantha, may be giant, but she's always been a picky eater. "She would only eat every two days, but weighed 140 pounds," says Lydia.

Picky and Sick to her Stomach

"I really had been struggling for years to get her to want to eat. She would walk by her food bowl and ignore it. I felt very stressed about it, when she hadn't eaten in 30 hours," Lydia laments.

After doing some research, Lydia found that picky eating is quite common for the breed. Still, she wanted to do whatever she could to help Samantha get the nutrients she needed and ease her tummy troubles.

Because in addition to her pickiness, Samantha also suffered from some big digestive issues. "Intermittent diarrhea was very normal for her, for years. She would get these stomach things once a month. For a dog her size, it was HORRIBLE."

Lydia first heard about Nom Nom when her other dog Charlie was diagnosed with aggressive cancer, and she was looking for real food, with more vitamins and better nutrition. So she decided to switch Samantha over to Nom Nom, too — and the fresh food was a hit from the very first meal.

"Nothing else had ever gotten her to eat that much. Now, she wants to eat Nom Nom more than any food I've ever seen," Lydia says. "Before she would eat only when hungry. Now she will stand by the bowl and be like 'Where's my next bag?'"

Making the switch was also huge for resolving Sam's other issues.

"She has not had diarrhea one time since I've given her Nom Nom, not once! Now her poop is so much better. It's normal, not too hard, not too soft, it's been good, I attribute that 100% to Nom Nom."

Samantha will be 10 in October, so she's come to have some mobility issues, but has been getting acupuncture in addition to her new fresh diet. "Now when she eats, she goes outside and gets the zoomies! She is kind of like a big bear, she is not a sprint around kind of dog, so for her to run and want to chase, it's so fun," says Lydia.

Lydia also appreciates the flexibility and freedom Nom Nom gives her. "I like that I can go in and change it when I want so she gets other recipes. And before, other people like the dog walker said she would not eat if I wasn't there. Now they can feed her even if I'm not there. Also, right now, the delivery has been great for social distancing."

While Samantha still occasionally does her own 'intermittent fasting,' the changes have been huge. "She's still a picky eater but it's unbelievable the difference," says Lydia. "Her diet, in my opinion was too heavy protein before. I think that the balance has been so much better for her."