Dental health is an important part of a pet's overall wellness, and periodontal disease is one of the most common medical conditions in both dogs and cats. However, it is poorly understood by both scientists and the general public. There have been few large-scale research studies conducted on periodontal disease in pets, and as a result the internet abounds with misinformation and conflicting advice based largely on unscientific anecdotal evidence.

Over the past year, researchers at Nom Nom have been hard at work understanding periodontal disease. We conducted a health and lifestyle survey of over 13,000 of our customers– one of the largest and most comprehensive studies ever conducted on periodontal disease in pets– through which we arrived at many interesting findings. While some of our findings corroborate the results from previous smaller studies, other findings provide new data-driven evidence about certain risk factors and signs of periodontal disease.

What is periodontal disease?

Periodontal disease, also called periodontitis, is caused by plaque buildup and bacterial growth in the mouth. Toxins released by bacteria, as well as the body’s natural inflammatory response, break down the bone and connective tissues around your pet’s teeth. In addition to causing tooth loss, periodontal disease has also been linked to cardiovascular conditions in dogs.

Who is prone to developing periodontal disease?

In our survey, 13% of both dogs and cats were reported to have a diagnosis of periodontal disease. These numbers are comparable to findings from previous studies that identified a prevalence of 15.7% for Grade III and IV periodontitis, however it is possible that the true prevalence is even higher, since not all pets with periodontal disease may have received a formal veterinary diagnosis. Previous studies have identified both age and size as risk factors, and our results confirm those findings. As you can see in the charts below, the likelihood of having periodontal disease increases as dogs and cats get older. While size does not play a role in cats, smaller size is also a risk factor in dogs. This is likely due to malocclusions from dental overcrowding as well as genetic factors. 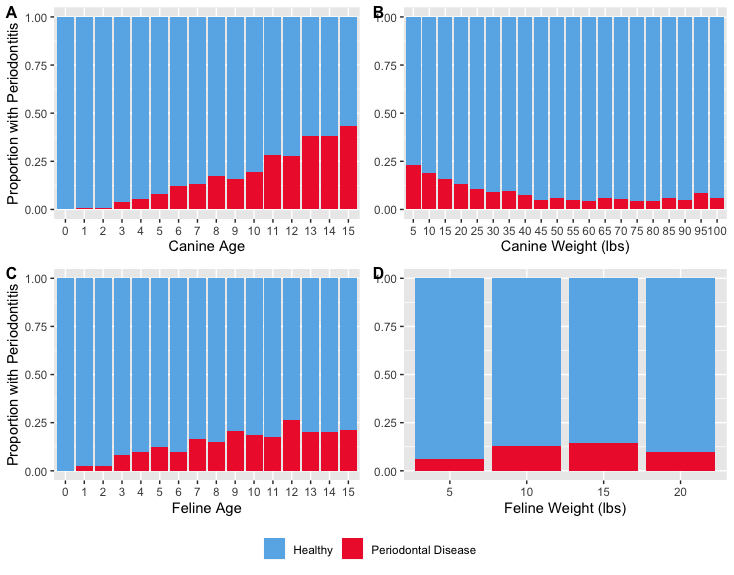 Some experts in pet health promote the belief that feeding a kibble-based diet can prevent periodontal disease. Their primary rationale is that the crunchy composition of dry food may mechanically scrape away plaque build-ups in and around the teeth while it is being chewed.

However, this is not supported by the data in our sample. In our survey, we found no statistical difference in periodontal disease between pets fed kibble and pets fed fresh food. Our findings are in agreement with other large cross-sectional studies that show no advantage to feeding kibble. There are many reasons why this may be the case. The increased carbohydrate content of some kibble formulations is broken down into sugar, which feeds the harmful bacteria that cause periodontal disease. Furthermore, many pets eat too quickly for the kibble to significantly abrade the plaque on their teeth.

What about the studies that show an advantage to feeding kibble? In many of these studies, all "soft" foods, from canned to home-prepared, were grouped together in the analyses. Many of these studies were done prior to the increased popularity of nutritionist-formulated commercial fresh food, so foods like Nom Nom have never before been compared head-to-head with kibble. We do note that not all kibble is created equal. There are several experimental studies which show that certain forms of kibble, with enhanced textures or chemical additives, reduce plaque relative to a typical kibble diet. However, since these formulations have never been directly compared to fresh food, there is no evidence showing that even these specialized types of kibble provide a significant benefit.

Furthermore, even though dental health is important, it's only one factor in overall pet wellness: research from both Nom Nom and independent external sources has found that a kibble-based diet is associated with an increased risk of other health conditions, such as obesity.

As people have become increasingly aware of the health risks of kibble, raw food has emerged as a potential alternative for reducing the risk of dental issues, based largely on anecdotal evidence and speculation. However, this assertion is unsubstantiated by our data. In our survey, we found no statistically significant differences in periodontal disease between dogs or cats receiving raw food diets and those receiving any other type of food. This is consistent with limited published evidence which, on balance, shows no effect of raw foods on dental health.

In our sample, raw foods are correlated with other dental complications. We found that dogs receiving raw food diets were 35% more likely to have broken or fractured teeth, possibly due to contact with sharp bone fragments. As a further cause for concern, raw food diets contain higher rates of bacterial contamination, and have been cautioned against by a number of veterinary and public health agencies.

Myth 3: Appetite loss is a sign of periodontal disease

An examination of the many pet health blog articles on the internet suggests that appetite loss, or reluctance to eat, is a common sign of periodontal disease in pets. At first glance, this doesn’t seem like an unreasonable assertion, but we were unable to identify previous studies that explicitly made this connection.

Furthermore, analysis of our data suggests that this is not always true. Ratings of eating enthusiasm are not statistically significantly related to the reported diagnosis of periodontal disease, in either dogs or cats. This may be because animals have such a strong survival instinct to eat, because they may resist showing pain as a sign of weakness, or because overt signs of serious pain may not be present until periodontal disease reaches extremely late stages.

On the other hand, our data shows that there are many other observations significantly related to periodontal disease, of which pet parents should be aware. These include bad breath, bloody saliva, chattering jaws, excessive lip-licking, dropping food or chewing on just one side of the mouth, bumps or lumps in the mouth, and resisting touch to the head.

Some pet parents may believe that bad breath is just a fact of life for dogs and cats, but the truth is that bad breath can be an indicator of poor health. In our survey, we found that the presence of bad breath is one of the strongest predictors of periodontal disease, which is consistent with the correlations observed in humans. In fact, dogs and cats with bad breath are over four times as likely to have periodontal disease than pets with fresh or neutral breath. 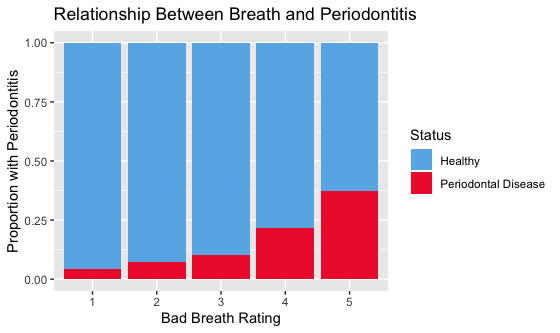 As always, the best treatment is prevention. Brushing your pet’s teeth regularly, ideally once a day or once every other day, is one of the best ways to prevent periodontal disease. Regular dental check-ups and cleanings will also help prevent plaque and bacterial build-up. Dental treats, rawhide, and chewy toys may potentially play a role in preventing gum disease, though anecdotal evidence suggests that to avoid fractured and broken teeth it’s best to avoid hard toys such as bones and hooves.

Once periodontitis has set in, treatment will depend on how far the disease has progressed. At early stages a thorough cleaning may be sufficient to prevent or even reverse more serious symptoms; however, at later stages, tooth extraction or gum removal may be required. Ultimately, your veterinarian knows your pet best, and may recommend different treatment and management strategies customized to your pet’s unique situation.