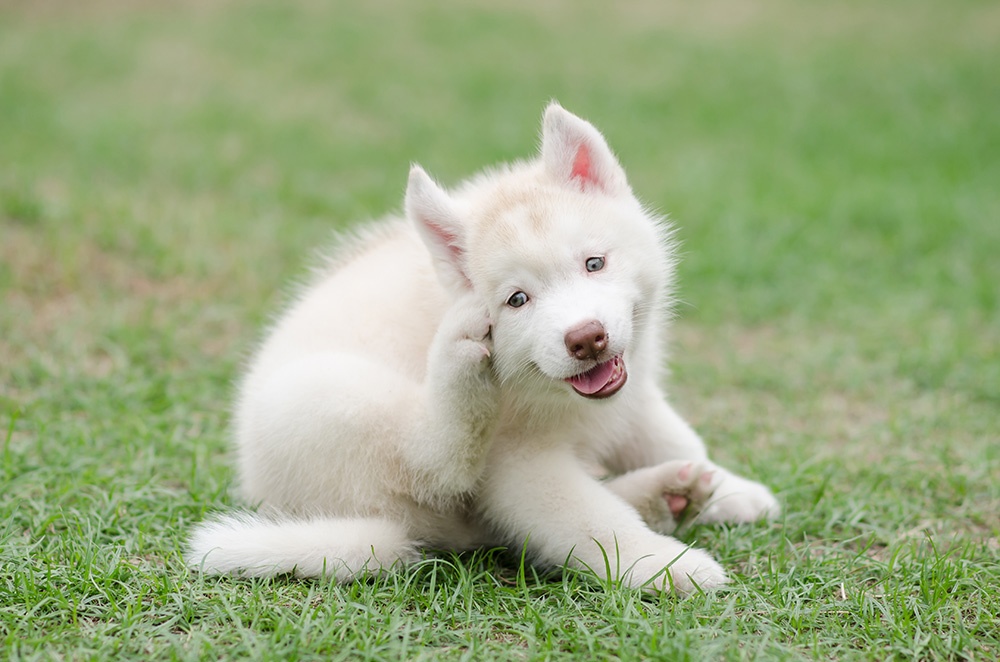 Dog food is one culprit behind allergic reactions in dogs that owners often overlook — it's easy to attribute the itching or licking to an environmental factor that causes skin allergies.

Just like us, canines can suffer from food allergies and intolerances. Food allergies in dogs can be very serious and cause not only digestive problems like vomiting and diarrhea, but also skin issues, and even behavioral problems.

We talked to Dr. Justin Shmalberg, a DVM and one of Nom Nom's own veterinary nutritionists, to create this comprehensive guide that covers the following:

"What most people think of as a dog food allergy is more appropriately called a cutaneous adverse food reaction or CAFR," says Dr. Justin Shmalberg. "It basically means there's some association between a food and a certain group of symptoms—usually skin problems or gastrointestinal problems."

In a true dog food allergy, according to Shmalberg, the culprit is often a food protein that triggers an adverse immune response, which then causes cells in the body to release histamines or compounds that lead to itching and many other allergic signs.

Still, true allergies, in which the immune system is attacking a food protein, are definitely less common than food intolerances. The takeaway, says Shmalberg, is this: "If your dog is otherwise normal, even if he's scratching a lot, a food allergy is unlikely. That said, diet can certainly play a role in helping to manage skin conditions and diseases, regardless of whether or not your dog has a food allergy." We'll discuss more about how you can tell the difference below.

"Meat, dairy, and eggs are often thought to be the most common dog food allergens," says Shmalberg. "Yet generally, it's the protein part of those foods that tend to be problematic, rather than, say, the meat itself." Keep in mind, veggies can contain protein, so they're not automatically safe.

That same review BMC Veterinary Research identified some of the most frequently reported dog food allergens involved in adverse food reactions. Here's a look, from most-reported to least-reported.

More facts about dog food allergens that are helpful to know:

Sneezing. Ear infections. Chronic Diarrhea. Restlessness. Dog food allergy symptoms run the gamut from skin reactions to gastrointestinal troubles to behavioral issues. Below you'll find a full list, broken down by category, to help you identify whether your pup might be suffering from a food allergy or intolerance.

Most Common Signs of Food Allergies in Dogs

These are the signs you'll see most often with a food allergy, says Shmalberg, starting with the single most common symptom: itching.

According to Shmalberg, only 10 to 30 percent of dogs with confirmed food allergies have gastrointestinal, or GI, symptoms like vomiting or diarrhea. "This is a condition that is much more often linked to skin symptoms," he explains (see above). "Sudden and short-lived GI symptoms are almost never caused by a food allergy. On the other hand, food allergies can contribute to or cause certain chronic symptoms."

These symptoms aren't as common as those above but may occur in some dogs.

The symptoms below are also rarer, and usually secondary to or linked to discomfort from symptoms listed above.

If a food allergy goes untreated, there are some more serious health issues that could develop. These include secondary skin infections, the development of more allergies, worsened symptoms, behavioral changes, and a poor quality of life.

It's that last point that is most pertinent. "Usually animals don't die from a food allergy, but it does affect their quality of life," says Shmalberg. "If they're itching all the time, it can feel like having a thousand mosquito bites all the time. While that's not as catastrophic as something like organ failure, from a day-to-day standpoint, it can be pretty hard on the dog." So, when a dog is feeling bad, that's when you may start to see some of those behavioral issues listed above. To avoid chronic ailments and problems, diagnosis and treatment are crucial. Read on for the details.

If your dog is constantly itching, it can feel like having a thousand mosquito bites all the time and lead to poor quality of life.

So, how can you tell if your dog is allergic to food? First, it's helpful to know how you might distinguish a food allergy from an environmental one. "Environmental or flea allergies are far more common," explains Shmalberg. If you suspect either of those, consult your vet, who can help identify and treat fleas, or do a combination of blood tests and/or intradermal allergy testing (which involves injections of potential allergens under the skin) to assess environmental allergies.

But if your dog has the following signs, talk to your vet about setting up an elimination diet trial.

Telltale Signs Your Dog May Have a Food Allergy (vs. an Environmental or Flea Allergy):

The most reliable way to diagnose a food allergy is to feed your dog something entirely new, and relatively pure, for at least eight weeks. For accurate results, you'll need to feed a non-contaminated simple ingredient diet (it can be commercial or cooked) for the entire trial. Most importantly, says Shmalberg, "the diet should include a single-source animal or vegetable protein and a single source of carbohydrate calories, without other natural flavors (that could have unidentified proteins)—and it must be a food your pet hasn't had in the past. Classic examples include venison and potato, rabbit and pea, and fish and potato." There are newer options out there too, like alligator and coconut.

It's also important you refrain from feeding treats, table scraps, snacks, and flavored medications and supplements of any kind that don't match the specific ingredient combo you're using for the trial. After at least eight weeks, to truly prove the food allergy, you must then feed the original food—the suspected allergic protein or proteins—again. If there's a reaction or breakout at that point, that's a pretty good indication of an allergy.

"The reality is that most owners don't complete this part, as they don't want their dog to have symptoms again," says Shmalberg. "An owner might just continue to feed the trial food if it seems to be agreeing with the dog." But reintroducing the suspected allergens is really the only way to confirm an allergy. Shmalberg suggests cycling through potential allergens one by one—chicken, beef, egg, dairy—to see what does (and does not) trigger symptoms.

Aside from elimination diets, there are a couple of other test options worth a look.

Wondering whether your dog might be predisposed to food allergies or intolerances? Certainly there's some evidence that if a parent has an allergy, their offspring is more likely to inherit it. So in that way, genes do play a role. But what doesn't seem to be a factor is a dog's breed. In fact, science has never confirmed that any one breed is more at risk for food allergies than another. "It can happen in any breed and in any dog," says Shmalberg.He also notes that some breeders and owners may have the view that deviating from the ancestral diet of certain breeds might predispose to allergies. For example, Huskies are accustomed to fish diets in their natural habitat—so could feeding them poultry lead to an allergic reaction?

In short, no. "There is no evidence to support that theory. Most dogs seem pretty adaptable to a range of foods," says Shmalberg. The age or sex of the dog also appears to have no relevance to food allergies or intolerances. Some vets do report that food allergies have been found in dogs less than 1 year old. So even young puppies can be affected (whereas they typically aren't as susceptible to environmental allergies at this age).

Keep in mind, food allergies can happen in any breed, and, of course, some breeds may be searched more frequently just because they're more popular in general.

Dog food allergy treatment boils down to one underlying principle: identify foods your dog is allergic to and avoid feeding him those. "That's why the elimination diet and trial period is so essential," says Shmalberg, "as it's the only way to identify which foods, and food proteins, a dog can tolerate and which he can't." Now, if it's a food intolerance rather than an allergy (which is far more likely), a food trial is still helpful, but a simple change of diet can be just as effective. "A diet with a different composition from the one currently being fed is often enough to improve symptoms," Shmalberg explains.

Unless formulated well, with the advice of a board certified or residency-trained veterinary nutritionist, many homemade diets are deficient in certain critical nutrients.

Aside from that, there are a few other tactics that come up in dealing with food allergies and intolerances. Here's a brief overview, plus considerations, pros, and cons for each.

Antihistamines and Other Medications

Antihistamines like Benadryl can minimize itching, and they're relatively safe and vet-approved for use at home. Topical anti-itch shampoos and ointments may help too—just be sure to get your vet's OK before giving your dog any over-the-counter medication or remedy. Antibiotics and antifungals like cephalexin and ketoconazole, for example, may help in the short term to treat secondary infections that occur when the skin is inflamed, "but symptoms usually recur after stopping," says Shmalberg. As for anti-inflammatory medications like steroids? "They typically don't do anything to help many food allergy symptoms," he says.

Homemade diets are sometimes used for elimination diet food trials, and for dogs with food intolerances or allergies. It's easy to see why they're effective—the owner has total control over the ingredients. But there's an issue with homemade dog food diets. "Unless formulated well, with the advice of a veterinary nutritionist, many are deficient in certain critical nutrients," says Shmalberg, "and those deficiencies could cause issues in the long run." The preparation is labor-intensive for the owner, too.

Likewise, vegan diets are used by some owners and veterinarians during and after food trials, but there's no evidence they're more favorable than a carefully selected diet with a single protein. (In fact, vegan diets often include a lot of different vegetable proteins.) But if a dog is allergic to multiple meats, a vegan diet is certainly one way to avoid them. Like homemade diets, vegan diets must be carefully formulated. "Some store-bought vegan diets were found to be deficient in critical nutrients, and they're really only mentioned by vets because they're becoming more and more popular among owners," says Shmalberg. "It's definitely not our top choice for treating food allergies."

There is no one best dog food for allergies. "It's very dependent on the individual dog," says Shmalberg. "But it's important to know what's in your dog's food, and be confident that it's made without contamination from ingredients that aren't listed on the label." That's why, when you're looking for a dog food without allergens, canned food and kibble can be tricky. With foods that are made fresher, and in smaller batches, you can see what's in it, and traces of allergic ingredients are less likely to slip in during processing. This is exactly why many owners consider making their own dog food. "It's all dependent on the cooking process and ingredient quality, and many conventional diets have had issues with cross-contamination, according to published studies," says Shmalberg.

When you choose a food that's freshly prepared with a few human-grade ingredients and no artificial fillers, you can see exactly what your pup is getting.

Here are his tips for choosing a diet for a dog with food allergies or intolerances: 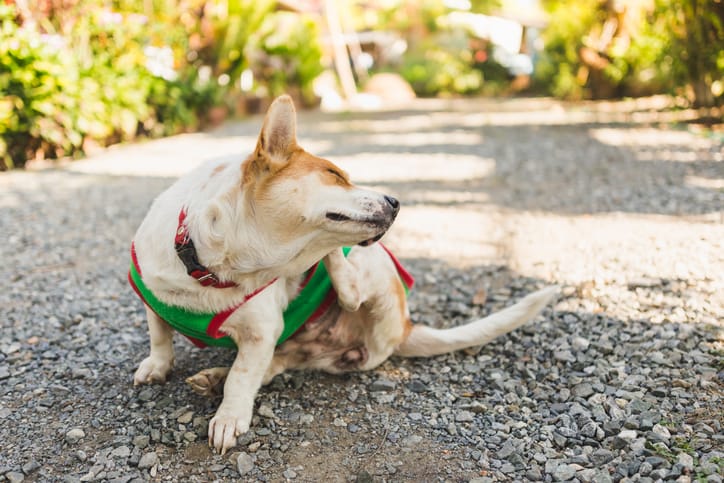 The Best Dog Food for Dogs With Allergies 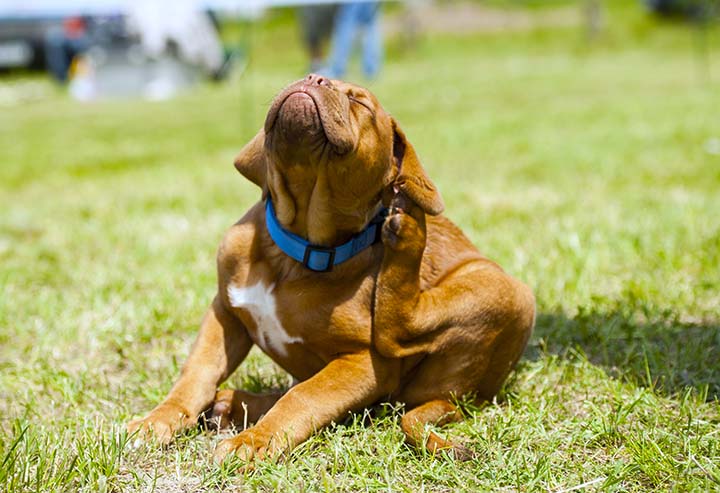