Beyond Bacteria: Your Pet's Non-Bacterial Microbiome 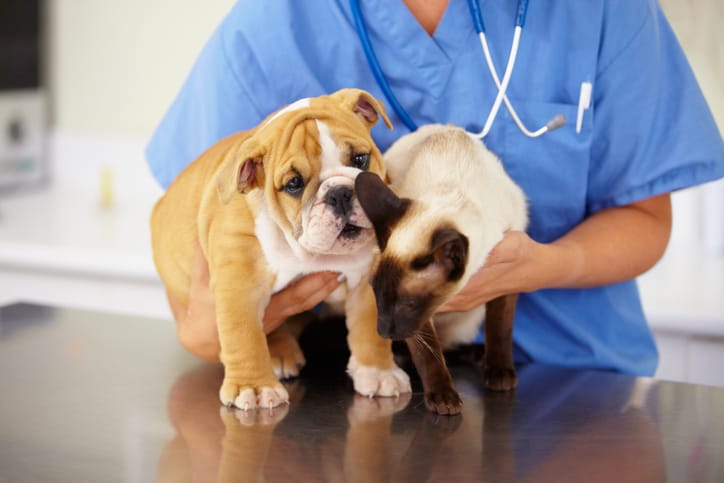 The world around us is filled with an incredible array of living things. While on a walk with your dog (or cat!) you might bump into squirrels, rabbits, birds, and all sorts of insects. Your pet may stop to sniff shrubs or mark their territory on at least five different types of trees.

Just as the world we can see has immense diversity, so does the microscopic one we can’t. Microorganisms such as bacteria, fungi, and viruses blanket every environment from the ocean1 to the tip of your furry companion’s nose2. A fraction of these microbes make us sick, but many of them are beneficial and comprise the microbiome.

The microbiome—also known as the microbiota—is a collection of microbes that live in and on an organism. Scientists have focused on characterizing the bacteria that comprise the microbiome and their relationship to health. The bacterial microbiome’s composition is affected by diet, environment, and age. Researchers know that while every one of us has a unique assortment, imbalances in core groups are associated with diseases. They have discovered links to conditions such as inflammatory bowel disease and obesity, as well as cancer.

But bacteria are not the only microbes hanging out in animal digestive tracts or on their skin. Viruses, fungi, and an odd group of life forms called archaea are there too. Researchers are beginning to understand what these other microbes contribute to animal health and how they work with bacteria.

Viruses are the most abundant biological entity on the planet. A single drop of seawater holds millions of viruses that if laid end to end would extend further than the closest 60 galaxies3. Yet no virus can exist on its own—it needs a host. Some of these viruses infect animals, plants, or fungi, which we are exposed to in our environment or food. Others, called bacteriophages (often just called phages), attack bacteria.

Just as living things are covered in bacteria, they are strewn with viruses that comprise the virome4. Also, like the microbiome, the virome generally doesn’t make the host sick. This is partly because most viruses in the gut virome are phages4. One study from 2017, for example, found that nearly 76% of the virome in healthy dogs is made up of bacteria-infecting viruses5.

Phages manipulate the microbiome in one of two ways: they kill or they hibernate. When phages kill, infected bacteria burst open and release millions of viruses into the environment. These viruses target specific species and consequently impact the composition of the microbiome. Other times, the phage goes into hiding. It inserts itself into the bacterium’s DNA and lies in wait to begin replicating. Such dormant viruses can control how members of the microbiota interact with the animal they live in, such as how they harvest energy4.

Whether the virome is linked to disease is so far unclear. One study found that patients with inflammatory bowel disease had more phages from a specific group than healthy people6. However, this trend was unrelated to changes in bacterial populations associated with the illness. Researchers have also seen differences in the virome in colon cancer, which they suspect may kill beneficial bacteria and allow types that cause cancer to thrive7.

Fungi have a broad swath of applications. We put mushrooms on our pizzas, exploit yeast to make bread and alcohol, or utilize mold to fight off infections with antibiotics. Fungi also colonize animals, where they make up the mycobiome8.

Compared to bacteria, fungi are present in much lower amounts on our bodies. One study, for instance, found that only 0.1% of the human gut microbiome is comprised of fungal species9,10. Diet is a major influence on the types residing in the gut; the environment affects those in the skin mycobiome8,11. Bacteria also appear to manipulate what kinds of fungi can survive, as some species produce substances that inhibit fungal growth in the body8.

Pets such as cats and dogs similarly harbor low levels of fungi, but only a few studies exist characterizing the composition of their mycobiomes11-13.  In one study from 2015, researchers found that the most abundant fungi present on canine skin were Alternaria and Cladosporium, two of the most common fungal allergens for humans13. A separate study found that these same groups are prevalent on cat skin11. The researchers also learned that fungi are evenly distributed across the cat’s body—unlike in humans where specific species are in certain areas—perhaps because of their unique grooming habits.

Some fungi that call animals home are capable of causing disease in special circumstances9. For example, Candida albicans is part of the human gut mycobiome but can make patients with weak immune systems sick. Similar to the bacterial microbiome, fungal imbalances, called dysbiosis, are linked to conditions such as inflammatory bowel disease8.

Scientists once believed that all life was divided into two groups: eukaryotes (plants, animals, fungi) and prokaryotes (bacteria). But in the 1970s and 1980s, they discovered an entirely new group of organisms: archaea14.

Archaea are now considered the bridge between eukaryotes and prokaryotes, as its members share characteristics with both groups15. Some species thrive in Earth’s most extreme environments such as hot springs, volcanoes, salt lakes and hydrothermal vents14. Others live in animal digestive tracts where they make up a small portion of the microbiome, called the archaeome16.

Concerns about livestock and high levels of methane emissions initially spurred interest in a potential link to the microbiome17. Cow burps, for instance, are an abundant source of this greenhouse gas that is then released into the atmosphere18. But what makes cows burp methane? Scientists discovered that the source is a group of archaea that live in their digestive tracts, called methanogens.

One study characterizing the microbes residing in canine intestinal tracts found that archaea make up only 1% of their microbiome19. And scientists have since discovered that among this group in humans 99% are methane-producing methanogens17. Exactly what these microbes are doing is still unclear, as archaea are not the cause of any known diseases. But research suggests that they may be linked to host metabolism and constipation20.

Studies regarding the virome, mycobiome and archaeome16 are still in their infancy. But new technologies are allowing scientists to gain a better picture of what microbes made animals their home. It’s still unclear exactly how all these microorganisms work together to keep their host healthy. Future studies will help researchers figure out the roles of bacteria, viruses, fungi and archaea in dogs, cats and us—which will lead the way to develop new treatments for microbiome-related diseases.